On 31 May 2016, a seminar was held at the Malmö City Court with the Court of the Future Network on the theme Swedish court design in historical perspective. The Court of the Future Network is a group of judges, court executives, architects and academics with an interest in court architecture, technology, security and access to justice. Coordinator of the network is Professor David Tait, Professor of Justice Research, Western Sydney University. About 20 delegates from seven countries, Australia, New Zealand, Canada, the United States, France, the United Kingdom, Ireland, visited courts in Denmark and Southern Sweden 30 May – 3 June 2016. Issues that were discussed are:

After a guided tour of the city court building in Malmö, the seminar, chaired by Frank Greene, took place with the following presentations:

Abstracts of their presentations can be found below. After the presentations, a short discussion took place, with Derek Green, Chief Justice of Newfoundland, Graham Brawn, Professor of Architecture, University of Melbourne, and Paul Burns, Head of Infrastructure, Irish Court Services, as discussants. To mention some examples from the discussions, Derek Green asked whether court buildings are needed in a future society where meetings increasingly are held virtually, and Paul Burns showed some examples of Irish court buildings inspired by the historical stone circle. Finally, professor Kjell Å Modéer handed out some copies of an essay in French about the application of the idea of Palais de Justice. 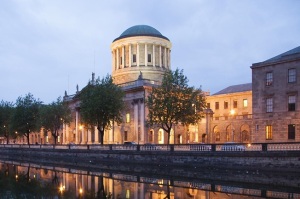 Eva Löfgren: Close, yet far away. On spatial integration and segregation in Swedish district court buildings

The issue of spatial distance and proximity has always been important to those involved in legal proceedings, even though it has rarely been articulated or documented. This paper will expose the on-going friction between two similar spatial polarities, integration and segregation, as they appear through the changes of Swedish rural district courthouses during the last 200 years. The scale of the analysis will vary from an urban planning perspective, to the spatial organization within the individual courthouse and courtroom. By setting out from the 17th century situation where permanent localities still constituted exceptions to the rule of ambulant courts, I will display how the law of 1734 fixed and segregated legal proceedings not only spatially but also architecturally. Nevertheless, as a continuation of past habits, the first dedicated courthouses were still multi-functional buildings, both socially and spatially integrated into everyday life. By the turn of the 20th century though, the court had withdrawn behind hedges and lawns, and all aspects of the courthouse and court’s grounds communicated spatial segregation. Finally I will discuss current court architecture and show in what way legal proceedings are, both fundamentally integrated into the urban spatial grid, and fundamentally segregated, secured or excluded – within the city as well as within the actual building.

Emma Nilsson: Architecture and the Making of Justice

In Northen Europe the dispensing of laws and settling of disputes have, since prehistoric times, been located at specific places – ting – that already had or were given spatial and material configurations in order to support the publicly seeking of justice and other common matters. Since the 18th century these places of the public have been given a more stable form through the erection of designated buildings – tingshus. Even though the first buildings were fluid in the way they implemented spatial and material directives given by prevailing legal systems, the biography of court architecture is a history of increasing regulation, standardization and spatial separation of different legal activities. Such processes of institutionalization have been fueled by changes in justice dispensation and reforms in the legal system, but architecture have played an important part in effectuating these changes, and thus also affecting the power relations established in processes of justice making. This talk will give a brief introduction to a theoretical framework where architecture is treated as more than the result of prevailing regulations, norms or values but rather as something active in shaping and making different bodies (such as injuried parties, lay assessors, defendants, witnesses) and how architecture supports or de-stabilizes different territorial claims. The concepts presented are developed in studies on public space (Kärrholm 2012, 2015) and urban materialities (Nilsson 2010) but form a theoretical perspective that can be useful when studying architectures of justice.

Martin Sunnqvist: The ‘ting’ and the stone circle

The concept of ‘ting’ stemming from the mediaeval local assembly was in the 1970s taken into the name of the general courts of first instance (tingsrätt). This was when the courts of first instance in the towns (mayor’s or magistrates’ courts, Rådhusrätt) were merged with the courts of first instance on the countryside (district courts, Häradsrätt). The concept of ‘ting’ has continuously been used at first for the three annual court sessions on the countryside and now for the sessions when several criminal cases are heard in the same day. An interesting example of maintaining the historical roots of the ‘ting’ is the stained glass window from the 1940s in the former district court building in Ängelholm, where the image of a stone circle is central. This example of using art in a court room to symbolize the historical roots of judging can be compared to more modern court rooms where such symbolism is seldom present. Swedish judges do not use robes and the coat-of-arms of the state is only present on the law books. I will conclude, from my perspective as a judge, with some personal comments about the balance between proximity and distance in the courtroom, both as regards measures and in a more metaphorical meaning.

Stained glass window by Ralph Bergholtz (1946) in the district court building of Ängelholm, Sweden. In the middle is the stone circle as an ancient symbol of judging.